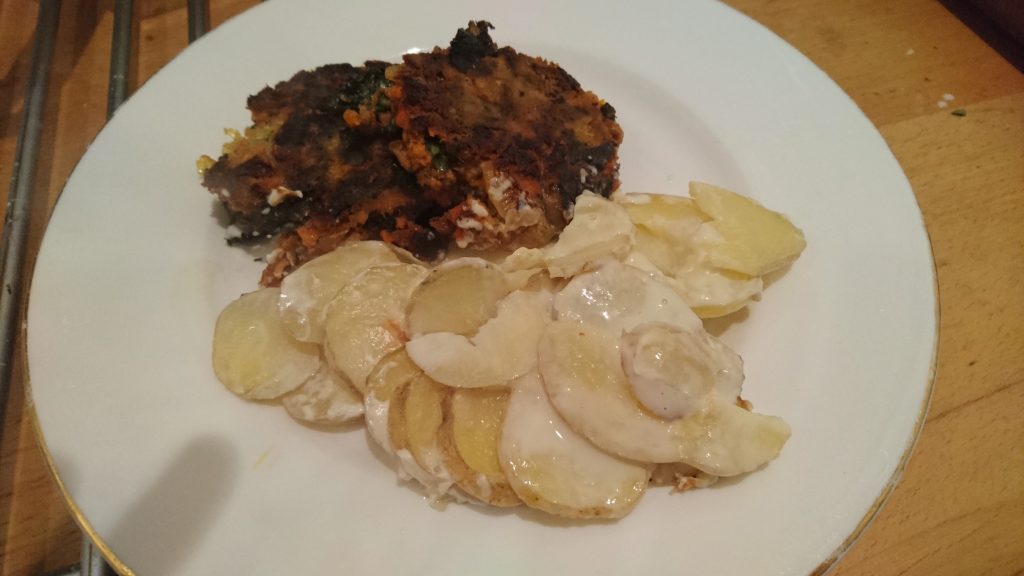 Like everything I cook I don’t go out and buy special ingredients, I make something up from what I have (delivered by Riverford, this week I had potatoes, carrots, onions and kale).  Experiment, play, see what happens!

Slice the potatoes really thinly or use of food processor, rinse and dry. Mix half a tub of cream (vegan) Scheese and a cup of rice/coconut milk in a saucepan and heat until mixed together. Put the potatoes into a roasting dish and pour over the sauce so that the potatoes are completely covered and bung in the oven at 200 ish. Cover the dish with foil and bake for half an hour. Meanwhile…

Fry the onion with some garlic until softened, chuck in the Kale (substitute any leafy green) with the stalks removed, throw in some herbs or perhaps some cumin seeds, whatever you have & like. Saute until the kale is soft. Boil the carrots (substitute potato – I’m going to try swede next time it comes in the Riverford box) until soft and then dry mash (don’t add butter or milk). Mix the carrots and kale in a bowl with some breadcrumbs, season. Initially use one flax egg (or vegan egg alternative) and mix altogether, it should form easily into burgers which retain their shape, if the mixture seems too wet then add more breadcrumbs.

After the potatoes have been in for half an hour remove the foil for the last 10-15 min.

Shape the kale and carrot mix into burgers, cover with a thin layer of flour and fry until golden.